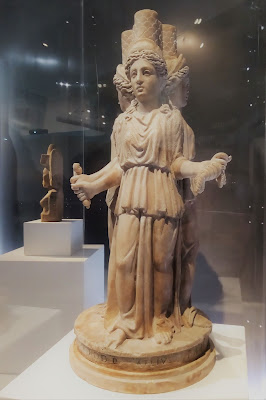 Hekate is one of the goddesses most associated with witchcraft. I photographed this Roman statue of her in her triple form at the Feminine Power exhibition at the British Museum. She stands in the section titled Magic and Malice and the label beneath her reads:

"The to ancient Greeks and Romans the goddess Hekate stood between life and death at the entrance to the underworld. Her approach was said to be signalled by howling dogs. An ambiguous being, she was invoked for guidance at times of transition and during magical rituals. Since the 1800s Hekate's relevance has been revived and her spiritual importance has been incorporated into religions such as Wicca and Modern Paganism."

It goes on to explain that her triple form indicates that, as a goddess of transition, she faces different paths and holds torches to light the way - although they've been lost from this statue. There's more about the history of the goddess of the crossroads in the exhibition catalogue. For a personal insight into her worship I'd recommend the book Hekate: A Devotional by Vivienne Moss and for Modern Pagan ritual practice I'd recommend Hekate: Temple of the Bones - Rituals to the Goddess, by Jennifer Teixeira

My Pagan Eye posts show photos that I find interesting - seasonal images, pagan sites, events, or just pretty pictures. If you want to send me a photo for a Pagan Eye post, please email it to badwitch1234@gmail.com Let me know what the photo shows and whether you want your name mentioned or not. For copyright reasons, the photo must be one you've taken yourself.