Mama Wata at Feminine Power: What Do You Think? 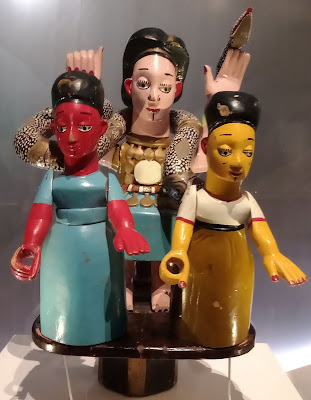 What do you think of the pale portrayal of Mama Wata in this headpiece, which is currently on display in Femine Power at the British Museum?

I must admit I was surprised when I saw this representation in the exhibition. It was also the subject of a question raised by a couple of people who attended a Goddess Awakening workshop I ran with Laura Daligan last month. The label below the object reads:

"Originally part of a mask, this headpiece was worn during masquerades by female initiates from the Annang Ibibbio peoples of south-eastern Nigeria. It shows Mama Wata as a fashionable woman with two attendants. Her light skin may reflect an association between spirituality and the colour white or the beliefs that Mama Wata is a spirit from overseas travelling to meet her global devotees."

However, a scholar with a specialty in African spirituality, Michelle Yaa Asantewa, wrote an in-depth blog post questioning the choice of this item for Feminine Power. She commented that although she "was pleased to observe a better effort to include expressions of African spirituality in this exhibition" she felt "uncomfortable with this representation because there is a position that Mami Wata was introduced to West Africa by European sailors during colonisation... This...reeks of mis-information... Africa did not need this introduction to water spirits like Mami Wata."

Michelle Yaa Asantewa is also the woman behind publishing company Way Wive Wordz, which in 2020 produced In Search of Mami Wata: Narratives and Images of African Water Spirits to showcase examples of the goddess.

But what do you think? Should the British Museum have chosen a different representation of Mama Wata. Do you have a favourite depiction of her? Please leave a comment!

You can view In Search of Mama Wata here.