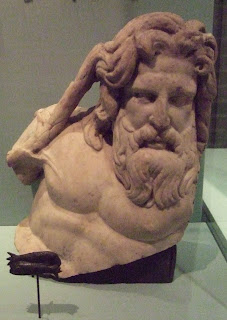 This bust of a water deity, thought to be Neptune, Roman god of both fresh water and the seas, is on display at the Secret Rivers exhibition at the Museum of London, Docklands. It is part of a display of items relating to the Walbrook and the Thames as sacred rivers. It is believed to have been part of an earlier temple on the site of the Temple of Mithras, beside the Walbrook.

Both the Thames and its tributary the Walbrook have long been considered sacred waterways. An information board at the exhibition reads:


'We are drawn to water. We need it to survive. Rivers often influenced the location of our our earliest settlements. The Romans founded Londinium on the north bank of the Thames with the Walbrook, an important working river, flowing through its middle... However, our connection to water goes beyond the practical, reaching into the spiritual.'

It goes on to explain how many items found in the river are related to spiritual practices going back into prehistory. These include statues of deities, and also offerings. This statue was just one of many relating to religious worship near the Thames in ancient times. I earlier blogged about Mars Camulos, who the Romans also revered as a guardian of the Thames. The most famous London water deity is, of course, Father Thames, who I wrote about in the very early days of my blog. I will also be blogging more about him at a later date, as this year one of my resolutions was to post regularly about the gods and goddesses of London.

You can also see a depiction of Neptune on the Painted Ceiling at The Old Royal Naval College in Greenwich. There is a statue of Neptune in the V+A museum too. The small plaque depicting fishes, in the picture above, was found at the same site as the Neptune statue and is thought to represent the astrological sign of Pisces.

Secret Rivers  is on at the Museum of London Docklands, No.1 Warehouse, West India Quay, London E14 4AL. Entry is free and you can find out more here:  https://www.museumoflondon.org.uk/museum-london-docklands