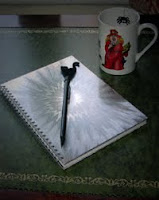 Every year at around New Year's Eve I make a list of resolutions of things I want to do during the following year. Last year I listed 10 things I wanted to achieve. This is how I did in each one:

Interview at least 12 people for A Bad Witch's Blog
I didn't do any interviews at all for my blog - not a good start. However, I will definitely put this one on my list for 2011 and try to do better.

Continue learning tea-leaf reading and write about it on my blog
This was something I managed to achieve and I can thoroughly recommend the book Tea-Cup Reading and Fortune-Telling by Tea Leaves, by a Highland Seer, to anyone else who wants to learn this form of divination

Learn about one other form of divination
A wonderful talk called Ogham and Druidic Tree Magic by druid and musician Damh the Bard, at Witchfest International 2010, taught me the basics of using Ogham. Ogham is an early Irish runic alphabet. Each symbol is associated with a tree and sets are normally carved on small wooden sticks that can be used for divination. I certainly wouldn't call myself an expert on Ogham yet, but I have learnt the basics.

Visit another six places with pagan or occult significance in London
I went to lots of places with pagan or occult significance in England including The Chiding Stone, The Wishing Face, Sutton Hoo, a small Saxon burial mound by a Sussex church and the village where Gerald Gardner lived, but few were in London. However, one place with lots of pagan and occult legends attached to it is The Tower of London, which I now work very close to and walk past regularly.

Investigate the ghosts in a haunted house
One of the most exciting things I did in 2010 was spend the night in a haunted theatre with ghost hunting group The London Paranormal Society.

Continue to read at least one book relating to paganism, magic or folklore each month
This was a resolution I definitely achieved. Among my favourite books I've read this year are Witchcraft: A Very Short Introduction, A History of the Pendle Witches and Their Magic: Wicked Enchantments, On Monsters: A History of Our Fears and Tea-Cup Reading and Fortune-Telling by Tea Leaves, which I have also mentioned above.

Write about mooncakes and at least three other magical or seasonal recipes
I don't think I wrote about any recipes on my blog in 2010 - a complete oversight. I'll make sure I do more about this in 2011.

Learn to meditate
Being sent a review copy of a book called The Meditation Experience helped me learn the basics of meditation. This was something I had struggled with over the years, but the book's step-by-step workshop approach to various techniques really helped me. I would recommend it.

Make at least one improvement to A Bad Witch's Blog
A Bad Witch's Blog saw two innovations in 2010. First, I added a pages features near the top of each entry, with links to such things as events, books and home. Second, I ran the first competition on my blog, to win a copy of Grimoires: A History of Magic Books and Witchcraft: VSI

Do a fire walk
This was probably my biggest achievement of 2010. On a bitterly cold February evening I managed to fulfill a long-held ambition to walk on fire (or rather hot coals). The fire walk was in aid of equal opportunities charity The Fawcett Society. It was a very scary thing to do, but I am glad I have done it.

That makes seven successes out of ten - a big improvement on 2009, when I only achieved about five of the things on my list of ten resolutions.

On my blog tomorrow I'll be writing more about how to make New Year's Resolutions that really work - and also come up with my own list of resolutions for 2011.

Kevin - I'm a Wiccan witch :) Most Wiccans believe it that magic should be used to help people, not to harm them. Many also believe in the law of threefold return - which is the idea that any spell you cast returns to you threefold. So, if you do healing magic, then you will in turn be healed three times over - but if you curse someone, bad things will happen to you in return. Good luck with your spells!