Looking Back: The Bad Witch's Highlights of 2013 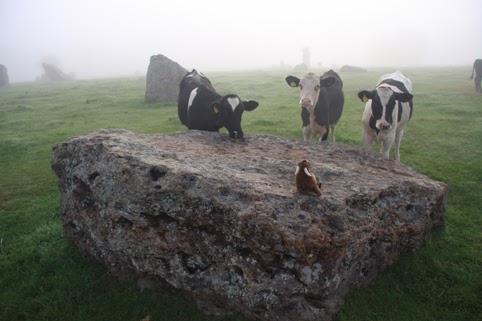 The old year is nearly done and I must say I’ll be quite glad to see the back of it. It has been a tough 12 months, in which I achieved very few of the things I aimed to do when I wrote a list of 10 places or events I wanted to go to as my New Year Resolutions for 2013.

However, I have had some really enjoyable times between the hard work, mundane problems and some recent bouts of winter illness and toothache. Here are some highlights  of 2013 that I've blogged about over the year:

January: This time last year I was taking a holiday over the New Year break. I enjoyed five days at the coast without TV and pretty much without internet. I think it did me good. Later that month I went to the launch party for The Steampunk Tarot: Wisdom From the Gods of the Machine. The divination set has lovely artwork and great depth of meaning in its symbolism. Although I was initially doubtful that I would use the tarot set as much as my favourites - the Wildwood Tarot and the Robin Wood Tarot, I've found myself using it more and more as the year has gone on.

February: Early in the year I was eager to do all things I had planned on my list of New Year Resolutions and achieved two of them, visiting an exhibition called Signs, Symbols, Secrets: An Illustrated Guide to Alchemy at the Science Museum and also going to PF London’s Imbolc open ritual.

March: The launch event for Curio City C was a great night out with films and talks about the City of London. It was held in St Ethelberga’s church, a historic building nestling between skyscrapers.

April: Beachcombing in Sussex after a spring high tide led me to create art and a witch’s staff from flotsam and jetsam

May: A visit to the Mind Body Spirit Festival in London was a great day out. While there, I was delighted to be given a review copy of the lovely Isis Oracle deck.

June: For the Summer Solstice I took the train to Brighton for the unveiling of the Blue Plaque for Doreen Valiente. It was a truly memorable event.

July: During a welcome heatwave after weeks of rain, I went on a fabulous walk into Arthur Machen’s London, lead by Robert Kingham. I blogged about it as Images and Reflections of the Thin Veil of London.

August: I was busy working all through the month, but wishing I was on holiday. While daydreaming about childhood trips to the seaside, I was inspired to write a very short story: The Ammonite Dream.

September: This month I visited one of the places I had said I wanted to go in 2013, The Stone Circle of Stanton Drew. I was also one of the winners in a photography competition with a picture I took while I was at Stanton Drew. (You can see my prize photo - Walrus in the Mist - at the top of the page.)

October: Fulfilling another of my New Year Resolutions, I took a trip to one of London’s Magnificent Seven Cemeteries on a day of storms and ill omens: London Necropolis: Abney Park Cemetery and Arboretum

November: I went to a fascinating talk at the National Archives, in Kew, on Witches – A Tale of Sorcery, Scandal and Seduction and blogged about Author Tracy Borman Talking About Witchcraft.

December: This month saw the publication of a book, Essays in Contemporary Paganism, for which I had contributed a chapter. I had written it back at Imbolc and seeing it on the shelves before the end of the year gave me a good sense of completion. Also in December I went on a ghost walk in which I may have caught something strange on camera. See for yourself on my post Yule Ghost Tales: Most Haunted House in London

I haven't yet decided if I am going to make a list of New Year Resolutions for 2014. New Year's Day also brings a New Moon. I feel today and the night to come are a time to send the old year packing.

After that, I'll see what the dawn brings, and what hopes and dreams are born in the increasing light of the days to come.
Posted by Badwitch at 09:00